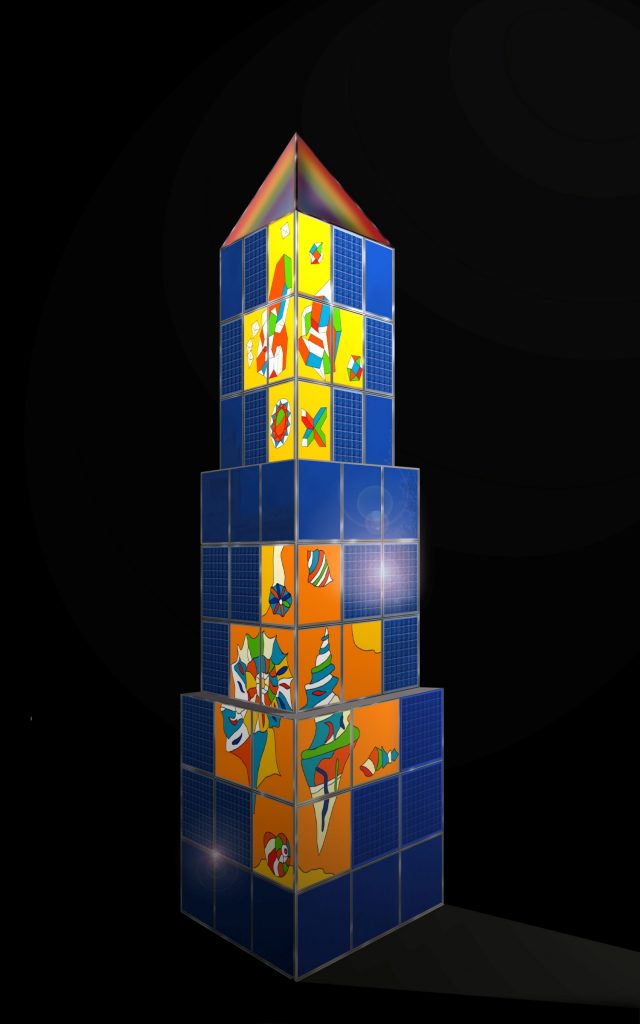 GAME FORMS OF THE POSSIBLE

Is it possible to be a puppeteer and a computer scientist, a speleologist and a science fiction author, in one person, and all that interconnected? There stood Herbert W. Franke, born in Vienna in 1927 and by now 95 years old, smiling at the exhibition of his computer-designed graphics, amused by the great response they generated. Only a few weeks later, he died in July 2022. He was the young-at-heart dinosaur of computer art, born in Vienna as the son of a professor of electrical engineering, whom he followed faithfully with a dissertation on electron optics. However, the subtle difference that distinguished the young scientist from his colleagues was aesthetic curiosity. He had access to the just emerging first generation of computers in the laboratories of Siemens, and used it. While informal, gestural abstraction dominated artists’ studios in the 1950s, Franke was thinking of an art that could be scientifically grounded. In conversation, he conveys to me, “Aesthetic structures are those that optimize the processes of perception.”

What was the role of the more sophisticated calculating machine, the computer that would later dominate everything? In the late 1960s and 1970s, I often visited my friend in his beautiful country house near Munich, Germany. Withdrawn but cosmopolitically oriented, he wrote book after book. The genres changed. Everything was connected. What he published in so-called science fiction novels was the extension of his current technical-cybernetic knowledge into game forms of the possible.

He would sit in his greenhouse adjacent to the house, tending or observing his cactus collection and dictating the scenarios of a possible future. His 1961 publication “The Orchid Cage” evokes a completely mechanized but uninhabited city that raises questions about its origins. And these can only be posed playfully, aleatorically. He takes up such questions in 2008 in a technically highly equipped puppet show entitled “The Crystal Planet”, written for the famous Puppet Theater in Bad Tölz, Bavaria, also with the knowledgeable support of his wife Susanne Päch.  Will we live in the middle of huge crystal landscapes? Hardly. But, again quoting from one of our many conversations: “I can imagine a human being that has little to do with ours. It would be a further development of the cyborg. Thinking impulses could be set in motion by the computer via data-processing systems.” The amazing quality of Herbert was to combine the strict logic of the scientist with the future-oriented vision. One could talk with him about this for hours. I am happy that I did it.

One of our shared creative themes was light. My Tribute to Herbert is a photo print of a sculpture I did 1992.

On which of the numerous planets designed by him in novels and illustrated with computer images has Herbert W. Franke now gone after his earthly death?

Jürgen Claus lives and works in Aachen, Germany and Baelen, Belgium. His oeuvre encompasses paintings, films, light and solar installations and underwater art. He is also a prolific writer on art, with theoretical works that have sold over 100,000 copies. Claus was a research associate at the Massachusetts Institute of Technology (MIT) and professor of media art at the Academy of Arts and Media (KHM), Cologne, Germany.