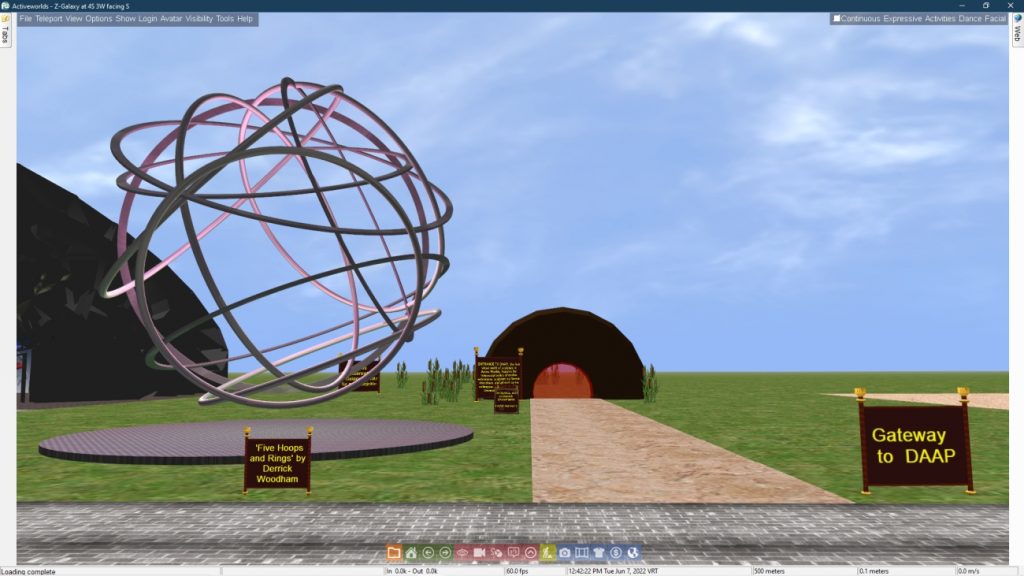 When Herbert began working on Z-Galaxy we had already been collaborating on the virtual exhibition of his three dimensional models and video animations in my presentations of an international group of digitally based sculptors, The Intersculpt exhibition series, in DAAP, Activeworlds, since 2001.

“Hoops and Rings” was installed in Z-Galaxy in 2010 at Herbert’s invitation, and selected and colored to complement his installation “Rolling Globe,” located close by. Herbert’s model displays the three dimensional animation of his globe using the varying tonal rendering of the faceted cyan surface in motion. “Hoops and Rings” animates matching pairs of hoops and rings rotating through each other around a common center,iIlluminated by an invisible pulsing pink light source at the common center of rotation.

As an artist who has always been fascinated by the experience of geometry, I found in Herbert’s attraction to the appearance of computer generated data a sympathetic spirit. His obvious enjoyment in the visual effects of his data explorations, and his appreciation of achievements by others, earn him a special place in the international community of digital artists.

Derrick Woodham was born and educated in Great Britain, graduating from the Royal College of Art in 1966. He represented contemporary trends in British sculpture in group exhibitions which traveled in Europe, the United States and Japan, before coming to the United States to live in 1968. Since then he has taught at the Philadelphia College of Art, the Universities of Iowa and Kentucky, and the University of Cincinnati, as Director of The School of Art from 1980-95, teaching sculpture and electronic art, and retiring in 2001. He began to model his sculpture on the computer in 1993, and has hosted a number of exhibitions in DAAP, his Internet-based multi-user three-dimensional environment in Activeworlds, including since 1997 several of the Intersculpt series of international biennial exhibitions of computer generated sculpture, where he was introduced to Herbert Franke.