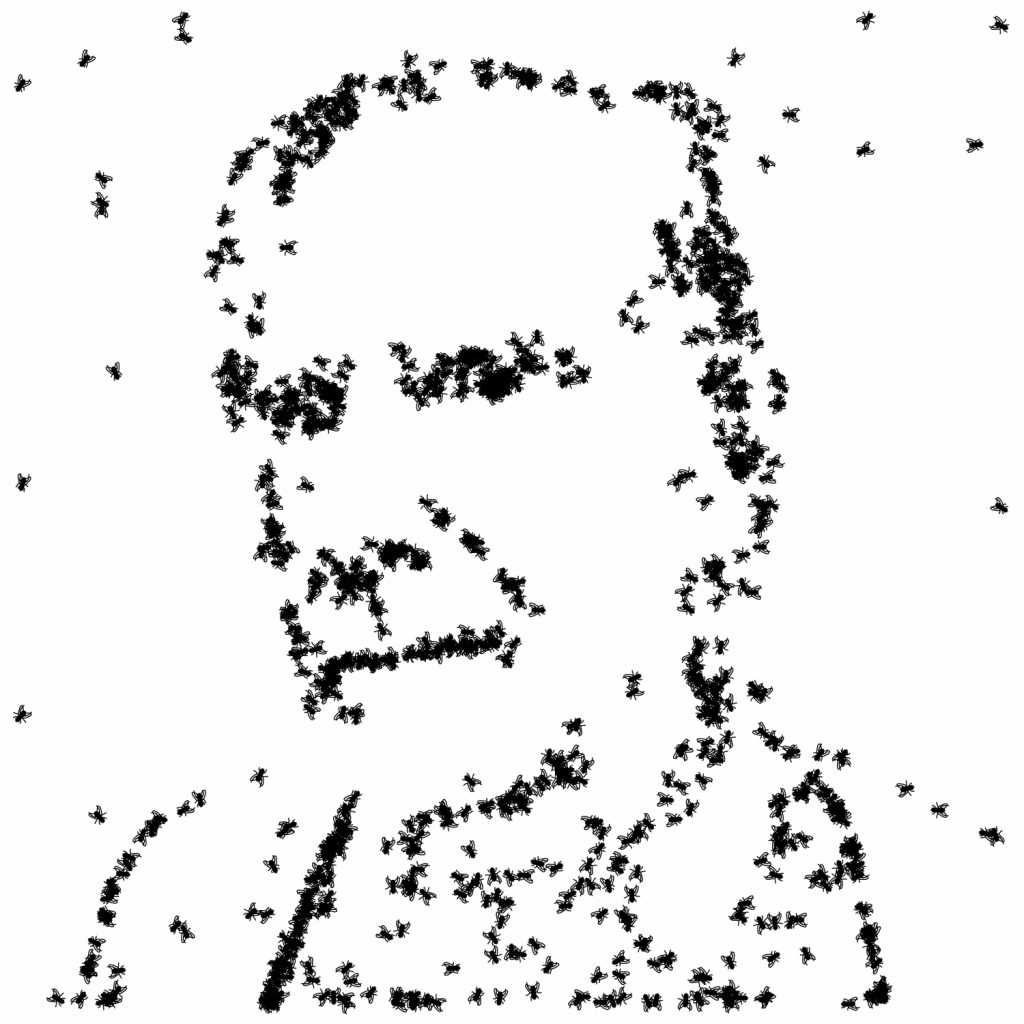 We met Herbert many times at various exhibitions in the 1990s as well as more recently at the “Art in Motion. 100 Masterpieces with and through Media” at the ZKM in Karlsruhe together with Peter Weibel and many pioneers of electronic art.

Herbert and Susanne were also so kind to invite us to Herbert’s 90th birthday celebration in their lovely house in Bavaria. There he showed us his newest online VR gallery that he programmed himself and which featured many of his early works. He also demonstrated us his latest coding examples and we were amazed how someone his age could be so mentally fit and interested in the latest coding and technology. His library in his house was also very impressive, as it featured an incredible selection of books on electronic art, science fiction and geology literature.

Around that time we also worked on a new series of artworks called “The Portrait on the Fly”. In this work we take portraits of important media art pioneers and transform them with our software to create fly portraits which can be printed out or plotted. Herbert immediately agreed to be part of it and we took his photo portrait. Finally, we were so lucky to hand over the final result, the “Portrait on the Fly (Herbert W. Franke)” plotter drawing to him on the occasion of his large retrospective exhibition at the Francisco Carolinum in Linz in March 2022. Herbert was a charming as ever and we really enjoyed this magnificent evening. We are minting the digital image of the portrait as our part of the Tribute.

Thank you, Herbert, for inspiring generations of media artists and paving the way for all of us!

Christa Sommerer and Laurent Mignonneau are internationally renowned media artists, researchers and pioneers of interactive art. They worked ten years in Japan as Associate Professors at the IAMAS Institute of Advanced Media Arts and Sciences in Gifu, Japan and as Researchers and Artistic Directors at the ATR Advanced Telecommunications Research Lab in Kyoto Japan. Before they were artists-in residence at the MIT CAVS in Cambridge US, artists-in-residence at the NCSA National Center for Supercomputing Applications Beckmann Institute in Champaign Urbana, IL, USA and artists-in-residence at the NTT-InterCommunication Center in Tokyo. In 2004 they set up the department for Interface Cultures at the University of Art and Design in Linz, Austria where they are both professors. They created 50 pioneering interactive artworks that have been exhibited in around 350 international exhibitions, some of them traveling show. Christa Sommerer and Laurent Mignonneau received numerous international awards for their works.